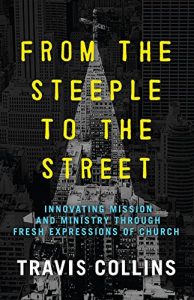 Church congregations are shrinking, and closing every day, so how do we save church? The answer, according to Travis Collins, is to stop trying to save church. Collins is the Pastor of First Baptist Church in Huntsville, Alabama, and Director of Mission Advancement for Fresh Expressions U.S.. In From the Steeple to the Street, he argues that church growth needs to worry less about replicating church services, and more about going into the community to share God’s love with people where they live and work.

Collins provides a useful overview of what is called “missional church,” a key idea in the latest movements to reinvent church. Collins draws on American and British examples for what works and does not work. The first critical observation is that people who run churches are not in charge of this. God is. God has been sending God’s self into the world long before there were any Christian churches at all. God sent Jesus, God and Jesus sent the Holy Spirit to the disciples and to all Christians ever since. When God goes into the world, it hasn’t meant setting up shop in the nearest pew and preaching good news from there. Instead, God has gone out to where people really live, which is outside of churches, to be with them. This, Collins argues, is God’s mission. Our job is to join that mission, not to be in charge of it.

But how do we do that? Collins argues that we cannot save church because it isn’t church that needs to be saved. Church – the gathering of people to sing, to listen, to pray, to be in community – was never the point of the faith. God’s work to save and help people is the point of the faith. But most church leaders spend their time trying to figure out how to bring more people inside their building for worship services. Many tinker with the worship service itself – more guitars, less psalms, a shorter service, better preaching. The problem with this approach is that a growing proportion of the population has no interest in attending church of any kind. It is like polka music. You either like it, or you don’t. You won’t get more people into your polka nights by adding some electric guitars to the accordions, or playing pop tunes in a polka style.

Collins does a good job of talking about the ways in which churches in the U.S. and Britain have decided to get into the community to help, and spread the good news, without just reinventing traditional church. In many cases ( almost half in one British study) this meant leaders who are young and unpaid, often doing this in their spare time, while their day job lies outside the church. Collins argues that it is not enough to become yet another social service provider, however. For this to be God’s mission, we need to be able to talk about it that way, to wear our faith on our sleeves. Here, Collins’ views may rankle. He claims that Jesus is the only gate to salvation, implying that other faiths are second best. This is obviously a highly debatable point, as one could just as easily argue that God has been sending the divine Self out into the world in multiple ways all through history, before and after Jesus’ ministry. It was unclear to me how Islam did not count as God’s reaching out into the world, any more than Judaism or other faiths, which obviously embrace and act on many of the same values we find in the Gospels. Aside from this point, there is much in Collin’s book which is very useful for understanding what a new generation of faith looks like, outside of church walls.

Scroll back to top