Through theological, historical, and literary analysis, these are the central questions that James Cone explores and attempts to answer throughout The Cross and the Lynching Tree. Beginning with the assertion that the lynching tree represents a Golgotha of the American South, Cone critiques the ways in which the lynching era has receded hastily from the cultural imagination (and particularly the theological imagination of the white church) – bringing Christ’s crucifixion in first-century Palestine into conversation with the ongoing crucifixions of Black Americans during the period of 1880-1940, and beyond. The Cross and the Lynching Tree is a story of both horror and hope, spirit and despair, and above all, a necessary injunction to recognize the cross – and our complicity with it – in our own recent histories and cultural memories. 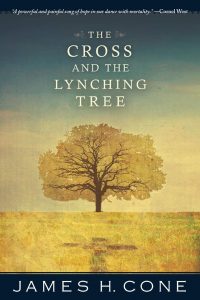 Cone’s argument and expert historical analysis is spread across five chapters and a conclusion, each offering a particular school of thought in regards to the connections between the cross and the lynching tree. Chapter 1, “Nobody Knows De Trouble I See” offers a three-fold introduction: first, a sweeping overview on the history of lynching in the United States; second, an analysis of the blues as a form of resistance – setting up the importance of the Black literary imagination in Cone’s later chapters; and finally, the importance of the cross in Black American Christianity, for “the final word about black life is not death on a lynching tree but redemption in the cross – a miraculously transformed life found in the God of the gallows (23).”

Chapter 2, “The Terrible Beauty of the Cross and the Tragedy of the Lynching Tree” is a reflection on Reinhold Niebuhr as representative of white liberal theology’s hesitation (or ignorance) when it came to engaging lynching as a prominent image in the theological imagination. Cone describes Niebuhr’s perspective on race as “complex” – “at once honest and ambivalent, radical and moderate (38).” Niebuhr, unlike many of his contemporaries, condemned racial hatred virulently, while also expressing sympathy for those who worried about integrating schools, encouraging patience and gradualism in the struggle for civil rights and racial justice, and refusing to engaging with the specific horrors of lynching directly. Niebuhr, in Cone’s genealogy, thus represents the white liberal subject’s failure to connect the cross of the Passion with the plight of Black Americans under Jim Crow and the lynching era. Cone’s reflections on this failure are therefore offered “to address a defect in the conscience of white Christians and suggest why African Americans have needed to trust and cultivate their own theological imagination (32).”

Chapter 3, “Bearing the Cross and Staring Down the Lynching Tree” turns to focus on another towering figure – Martin Luther King Jr. and the “struggle to redeem the soul of America” sparked by the lynching of Emmett Till in 1955. While Niebuhr’s theological ethic focused on the proximate justice achievable by human beings, King’s revolutionary spirit focused on the cross as a symbol of empowerment against impossible odds. As the cross was a symbol of God’s love defeating death in the biblical story, so too did it embolden freedom fighters to bear witness to justice, even unto death. In this chapter – as in others that wrestle with the idea of redemptive suffering – Cone is careful to not glorify suffering as such, as that would legitimate it, but to offer the insight that hope can still be born out of terrible circumstances.

In Chapter 4, “The Recrucified Christ in Black Literary Imagination”, Cone focuses on the Black poets, novelists, and other artists who “saw clearly what white theologians and clergy ignored and what black religious scholars merely alluded to: that in the United States, the clearest image of the crucified Christ was the figure of an innocent black victim, dangling from a lynching tree (93).” Through an analysis of the poetry of Countee Cullen and Langston Hughes, the stories of W.E.B. Du Bois, and other literary and artistic forms, Cone shows that an explicit connection between the cross and the lynching tree did not come from inside a church – or even necessarily from people who considered themselves religious – offering an important insight into the location of theological knowledge and the limits of that knowledge when confined to the academic or ecclesial setting.

The final chapter, “Oh Mary, Don’t You Weep”, focuses on women’s roles in opposition to lynching, as well as womanist critiques of the theological emphasis on the cross and suffering. Here, Cone details the anti-lynching advocacy of women such as Ida B. Wells and Fannie Lou Hamer, the impact of Billie Holiday’s haunting protest song “Strange Fruit”, while also displacing the dominant image of the lynching victim as male, showing the surrogacy role that black women were placed in as lynching victims themselves. As in previous chapters, Cone is also insistent that his meditations on the centrality of the cross do not redeem suffering itself, and accepts the rejection of an “uncritical proclamation of the cross” offered by womanist theologian Delores Williams (150). In the end, however, Cone does argue that the cross must be kept at the center of the faith so that the reality of suffering is not ignored.

The Cross and the Lynching Tree is not only a necessary theological intervention, but a text with vital importance to those in pastoral ministry. Cone’s critiques of silence on the subject of lynching in white churches show the obligation to not ignore the crosses that loom in our own backyards and sanctuaries. This is true particularly for those living and working in the United States, but also those outside of the specific locale that Cone assesses. The lynching tree is specific to Black American experience, as is Cone’s analysis of it, and should not be extrapolated out of that context. Yet, Cone also provides a framework for considering what other violence has been ignored in the theological and cultural imagination – when it is necessary for it to be remembered and connected to the biblical narrative. What, for example, of cross and the residential school? Though Cone’s text does not answer this question, his theological and historical analysis lays the groundwork for this reckoning and others of its kind. The task is both to remember and provide hope: “The lynching tree frees the cross from the false pieties of well-meaning Christians … Yet, the lynching tree also needs the cross, without which it becomes simply an abomination. It is the cross that points in the direction of hope, the confidence that there is a dimension to life beyond the reach of the oppressor (161-2).”